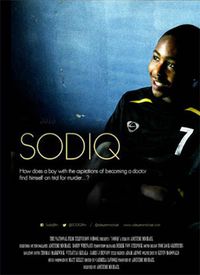 How a child who dreamed of becoming a doctor ends up being charged with murder? Adeyemi Michael starts a quest to find the turning point in the life of young british man Sodiq Adeojo.

Sodiq, A promising young man and the shadow of a crime

"Sodiq went to college but people knew about his street identity so he could not escape it" explains English director Adeyemi Michael about a boy he met during his youth in Peckham, a low-income neighborhood in south London, and that several years later, at the age of 20, ended up being sentenced to 30 years in prison for homicide.

When he was a kid, Sodiq dreamed of becoming a doctor while also being one of the main promoters of sports in his community. Yet, ending the life of another young athlete named Sylvester Akapalara, who was also immersed in street life, meant not only the loss of his freedom but also the outburst of a way of life that irremediably leads young people to violence in many parts of the world.

But what are the particularities in Sodiq's life that led him to this course of events? In an intimate approach and from his knowledge of the harsh environment of Peckham, director Adeyemi Michael resorts to interviews to Sodiq’s friends, relatives and experts to build a first-person essay on this tragic case.