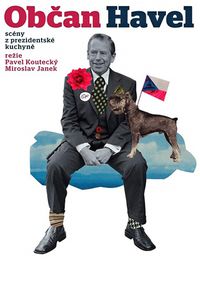 The shooting of the film about Václav Havel, the president of the Czech Republic, was started in 1992 by Pavel Koutecký. After his tragic death, Miroslav Janek took over the shooting and finished the documentary made of gradually collected pictures of the political figure, managing to archive the atmosphere of the post-communist Czech Republic and substantially helping to define the boundaries of a documentary representation of the new Czech political scene.

Citizen Havel, in the corridors of power

Czech director Pavel Koutecky is a privileged man behind the public scene of the Czech politics in the post-Communist era. His presence is one of the few who enjoy full access to the corridors of power behind the shadow of Václav Havel, the charismatic president who led the political transition of the then Czechoslovakia after the fall of the Soviet bloc.

After tragically dying during the shooting, his colleague Miroslav Janeck takes over and continues what must have been an unmissable opportunity: the portrait of the untold memoirs of one of the most important political figures of the late twentieth century.

Citizen Havel shows us the transcendental interstices in the corridors of power. Some of these scenes are a secret negotiation talk with a political rival, the rehearsal of a speech that will be marked in history, the suggestions of his communicational advisers or the behind camera during the photo shooting with the woman that would be his wife. A cautious, spontaneous and always intelligent Václav Havel writes the new Czechoslovakia´s history during these secret moments.

The film shows a man submerged in an unprecedented political maelstrom that we only feel gravitating around the grainy images of beautiful 16-millimeter film. Very aware of small details such as the need for a layer of makeup during a television broadcast, the importance of the positions of the members of official cabinet on a stage, or the special attention one must have when walking on the snow in an official parade, Václav Havel seems to be risking his political career and the destiny of his country in every blink.

Behind the tasks of the political job, we also know the human Havel. A nervous joke before one of his surgical interventions due to an incipient lung cancer, the joy of marrying the woman who will color his tough days or the pleasure of reciting a poem in the middle of a work meeting. The film is a provocative trail thrown to those who still do not take sides to the dilemma of who makes story: if peoples, or individual men.